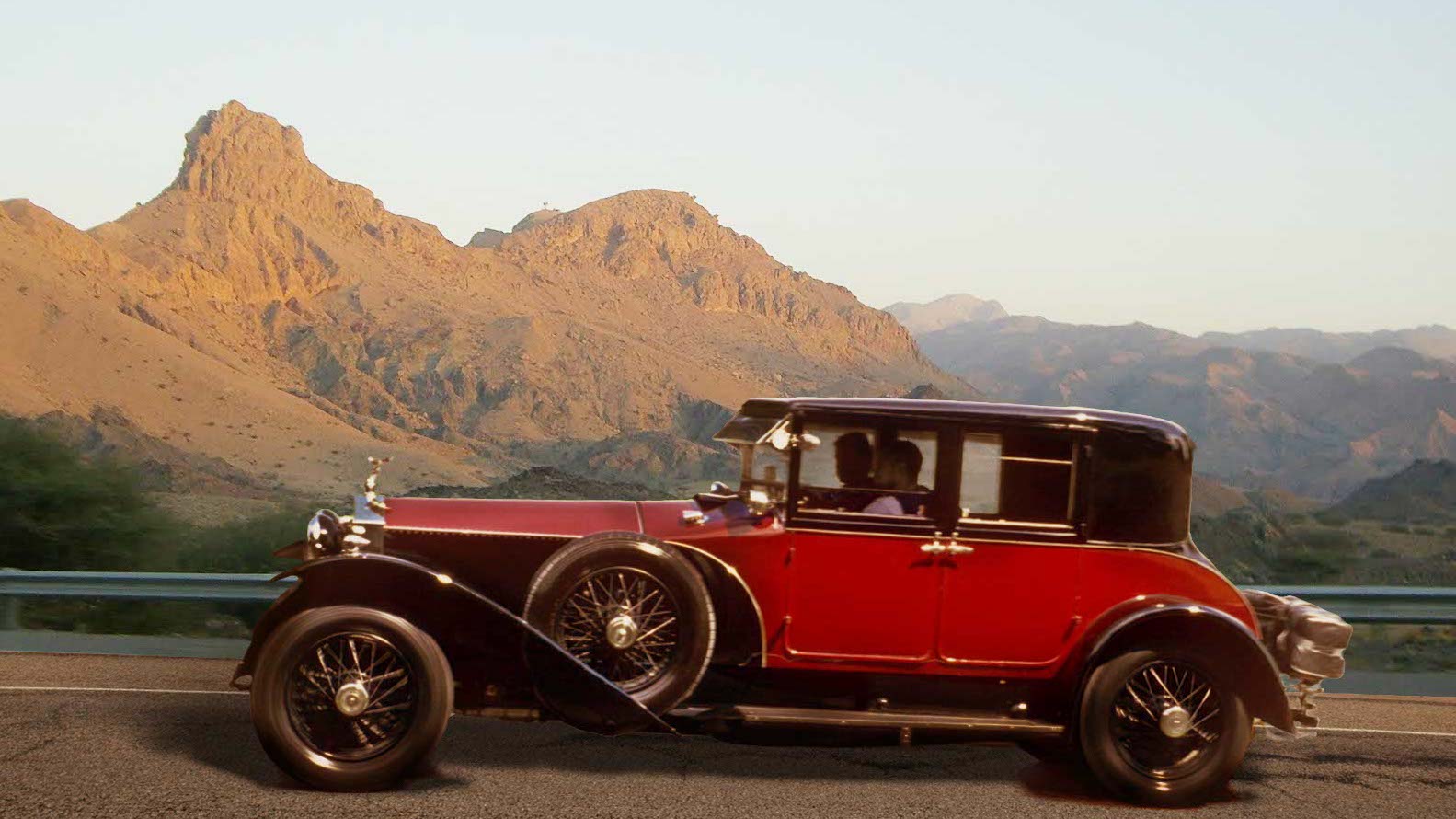 In , October 2016, Rally Royale will bring up to 26 international premium classic cars to Oman for a 21-day Grand Tour. The rally will coincide with the run up to the Sultanate’s 45th national day celebrations. Covering more than 4,000 kilometres, the drivers will stay at some of the world’s finest hotels, enjoy local culture, and marvel at the breath-taking landscape of this country. The Oman Grand Tour will be the first of its kind classic car rally in the gulf region. The Director General of Oman Tourism, Mr Al Mamari said that the ministry looks forward to seeing “Rally Royale Oman 2015 become a hallmark event for Oman.”

Grand Tours like this are very popular, especially in Britain where pre-war and pre-seventies classics such as Bentley, Rolls Royce and Aston Martin are lovingly restored and taken on epic journeys around the world. In fact, the inspiration for us is the traditional trip in Europe where young wealthy men and women would travel across the continent as an educational rite of passage. The term is also associated with the Grand Tourer or GT, which is a performance or luxury car capable of high speed comfortable long-distance driving.

British and Omani royals have a soft spot for high performance luxury cars. HM Qaboos Bin Said himself has an impressive collection of classic vehicles including several Rolls Royces and a couple of Aston Martins. The British royal family also have a long history of bespoke limousines featuring a strong relationship with Bentley and Rolls Royce. Taking these majestic vehicles on long-distance rallies to far-off places is a popular activity amongst a wide group of people. In a world with instant access to everything, our participants just love to get behind the wheel, breath in the history and discover new places. And Oman provides the perfect backdrop for this exuberant passion for driving.

The Rally Royale Oman Grand Tour will start in Muscat where the owner’s cars will be delivered. An exclusive reception with local dignitaries will be held in Muscat. After exploring surrounding areas, we will proceed to the Fjords of Musandam in the north, returning through the UAE and majestic Jabal Al Akhdar Mountains. From there we will travel through the desert, staying in one of Oman’s many premium desert camps, and then along the dramatic coastal road to the southern city of Salalah. We will conclude the tour with four days in and around the city, from which guests will travel back to their countries of origin. There will be plenty of time for activities and to explore Oman’s many natural and cultural heritage sites, as well as to relax in her prestige boutique hotels and resorts.

WHO SUPPORTS THE EVENT

Omani official representatives and sponsors have been extremely helpful and will be providing logistical support for the event, ensuring a smooth and safe trip. We’re also aiming to have some great names in the car world join in with the rally. Ahmed Al Harthy is Oman’s top racing driver and one of their leading international sportsmen. In 2014 he is driving an Aston Martin Vantage GT3 alongside Michael Caine in the British GT Championship and with Caine and Stephen Jelley in the Blancpain Endurance Series. Ahmed is thoroughly passionate about his country of birth, and keen to support the Rally Royale Oman Grand Tour in 2015.

Among the countries of Arabia, Oman is the most welcoming, safe and naturally diverse. This is a land whose charms are as timeless as the desert sands. Within its borders you’ll find an amazing diversity of natural beauty, from majestic mountains to fine beaches and precipitous fjords. Its human story is equally engaging, with a rich cultural heritage to discover. It has a fabulous modern road network, and you’re never too far from the past, in the shape of forts and citadels, tombs left by ancient civilisations and some of the oldest souks in the Arab world. And yet Oman is also a modern, forward-looking country. Every year brings fresh reasons to visit, including the appearance of luxurious new hotels and resorts.

THE INSPIRATION BEHIND RALLY ROYALE

Founder Ruba Jurdi was inspired to create Rally Royale after travelling on tours such as the Rolls Royce, Bentley and Jaguar classic car rallies in Europe and Australasia. Ruba’s vision is to use Grand Tours to inspire cross culture awareness, and promote better relations between the region of her origin and the rest of the world. In 2014 Ruba, together with her business partner Arthur op den Brouw, set about planning the Oman Grand Tour 2015.

Rally Royale is a London based organisation. We are working collaboratively with our lead partner, the Ministry of Tourism. We have been working closely with a number of advisors including the Automobile Association, The Oman Embassy, The British Embassy through their UKTI team and the Anglo-Omani Society. Our Rally Advisors are John Brigden and Katarina Kyvalova both with many years experience in the preparation and management of large rallies. Kinda Jourdi, previously employed by Kingdom Holding, provides regional sales support from Dubai.

Ruba is a Classic Car Rally enthusiast, having travelled on premium rallies in New Zealand, Australia and Europe. After working at the BBC, and then starting a media company in London, she went on to launch Rally Royale which is now her focus.

Katarina is a long-term member and a rally organiser at Germany’s largest club, the ASC, which is also the oldest European classic car club. In 2014 Katarina was one of a very small number of women drivers to participate in the “most amazing spectacle in the classic car world: the Mille Miglia”.

Kinda has many years experience working in the Middle East and abroad. Recently she was responsible for managing Kingdom Holding flight itineraries and programs when abroad. She is our representative in Dubai.

For more information about the rally visit: www.rallyroyale.com